Is ThermalBuck a face-sealed or a water-managed window installation system — or a little of both?

ThermalBuck is a “Rough Opening Extension Support Element” with a high-density EPS core and a high-density plastic casing (a lot like a truck bed liner). It is structurally fastened to the wall framing using nails and adhesive, and then the window is structurally fastened through ThermalBuck to the framing, using long #10 screws. GBA news editor Scott Gibson reported on ThermalBuck in an April 2016 article called “An Alternative to Wood Window Bucks.”

The novelty of ThermalBuck and the tirelessness of John Brooks have led to ThermalBuck getting quite a bit of attention as a high-performance “outie” flanged window installation system. 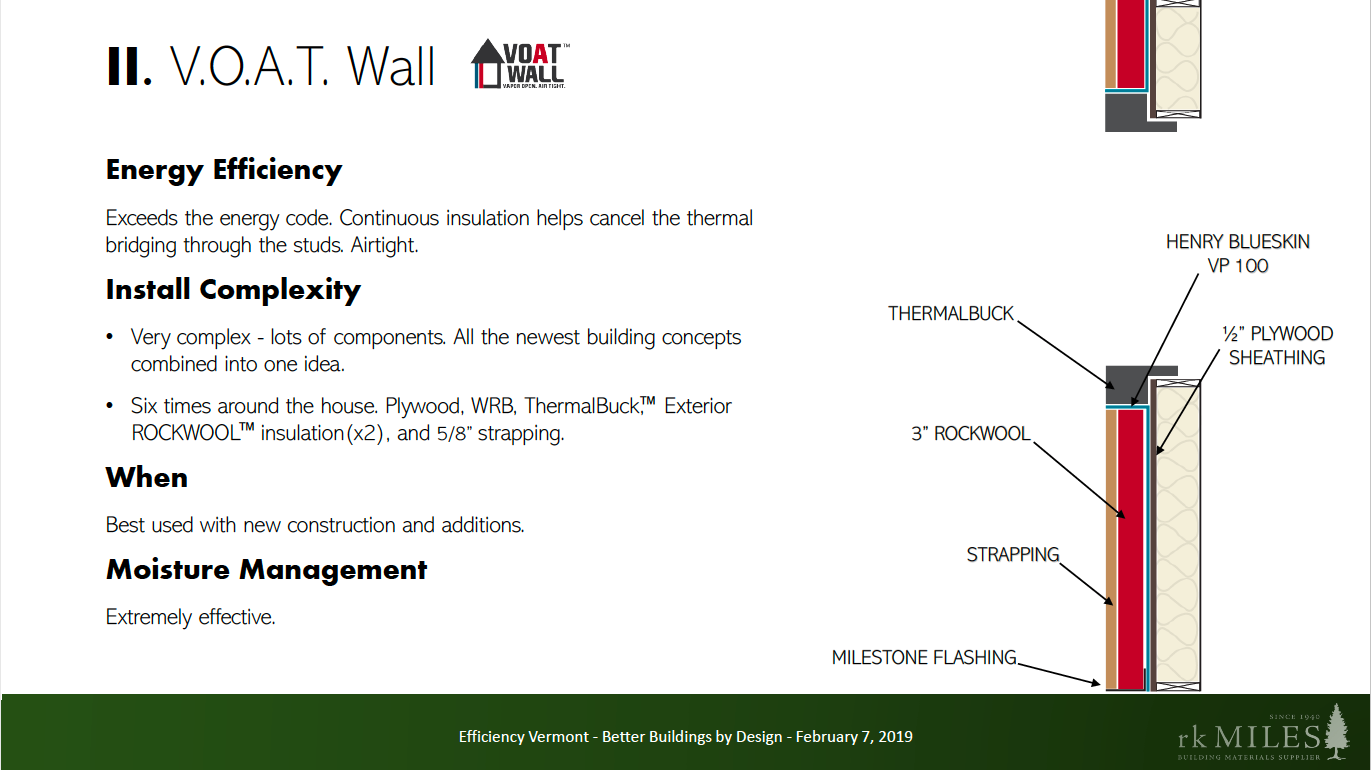 But when I looked at the five wall mock-ups in the front of the conference room, I saw just one — the ThermalBuck VOAT wall — that did not accommodate a sloped sill or a back-dammed sill pan.

It sure looked like the ThermalBuck system resulted in a face-sealed rather than a water-managed window installation. But ThermalBuck claims to have an “integrated sloped sill.” So which is it? 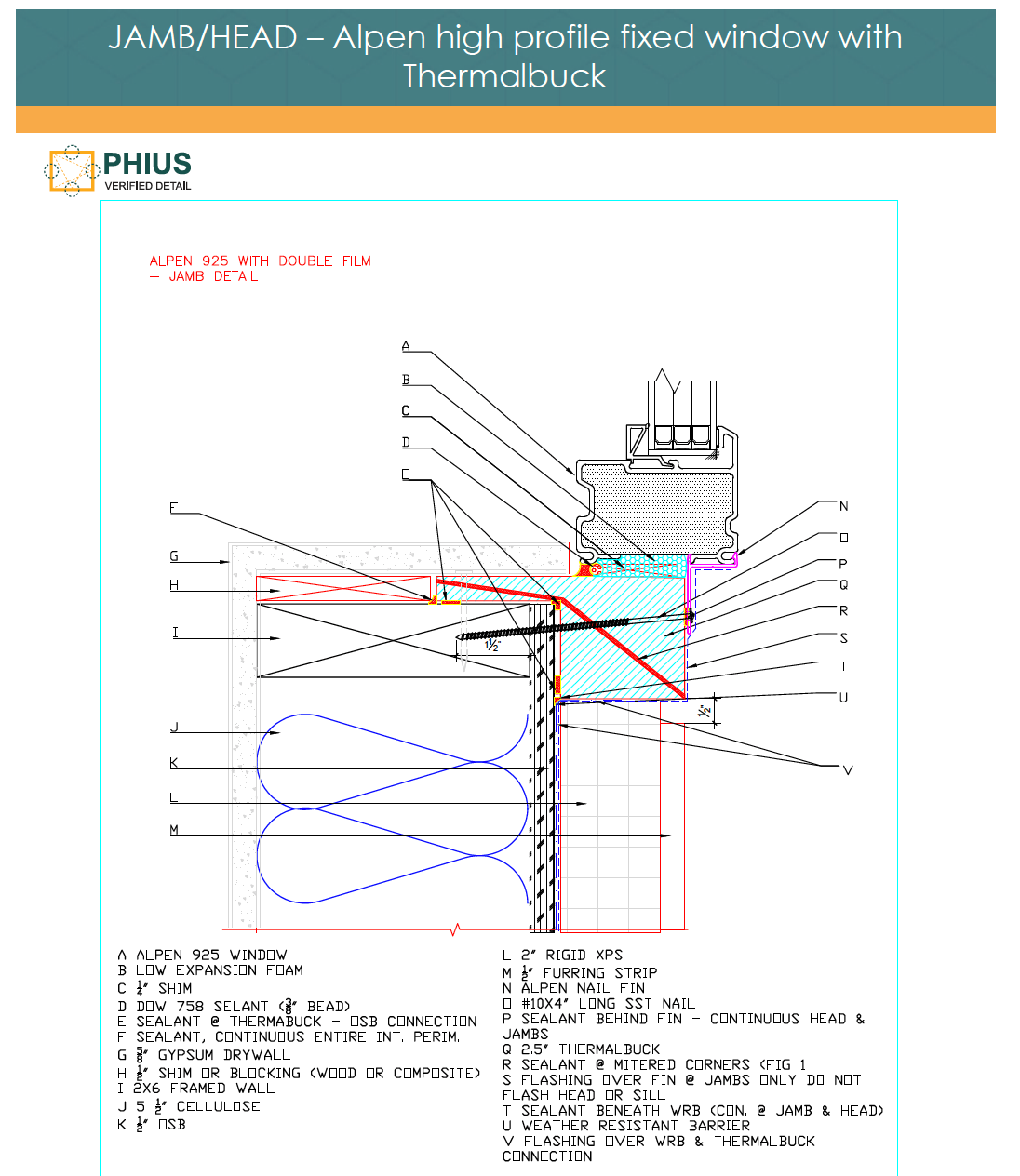 GBA’s Detail Library has a series of details for “face-sealed” and “water-managed” window installations. The key difference between the two is that the former relies on keeping water out with sealant at the face of the water-resistive barrier (WRB) while the latter adds a weather-lapped rough opening system leading to a sill pan that drains to the exterior.

The Building Science Corporation climate-based Guides and their Water Management Guide state that while water-managed window installations are recommended for all levels of bulk water exposure, situations exist that will tolerate a face-sealed approach: regions with less than 20 inches of precipitation, sheltered designs, storage/reservoir claddings, and high drying potential wall assemblies. While not explicitly stated that all of these conditions are required for a face-sealed window installation, I believe that the full monty is implied. 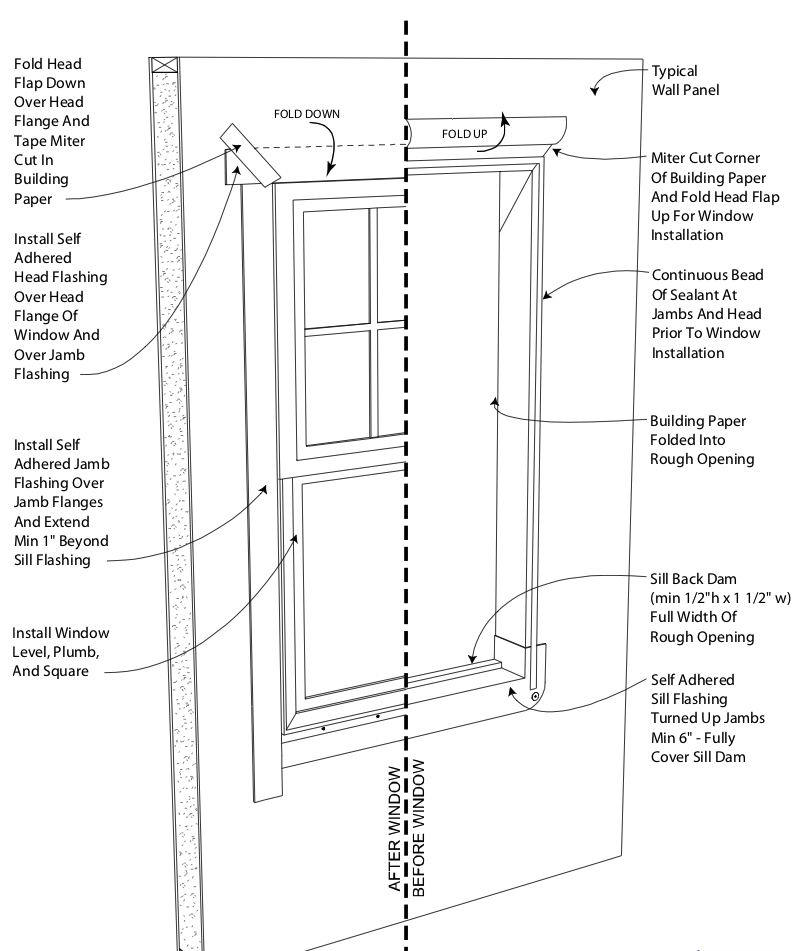 I believe that all of ThermalBuck’s installation methods have the following characteristics in common:

So what is the problem?

Everything is weatherlapped and there are two systems keeping water out: the face sealant of the ThermalBuck installation and the tapes that are used when the window is installed. The problem is, as John Brooks states in one of his installation videos (“How to Install ThermalBuck – Exterior Insulation as the WRB” ), “All windows are eventually going to leak; it’s just a fact of life.”

High performance exterior wall assemblies all have these four control layers in order of priority:

ThermalBuck rocks 2 and 4, and in the VOAT wall does the same for 3. But the most important first one — bulk water — the control layer is not up to the same level of defense as the other three control layers, in my opinion.

Would that do it? Make ThermalBuck high-performance all the way around? I am sure there are additional details to consider and issues that these changes will raise, but as we strive to improve the performance of buildings, we need to honor, by priority, those pesky control layers.