Can Buildings Take Vacation Too?

This question has come up several times in the last few years: what sort of moisture issues do we need to be concerned about if a building is “shut down” for an extended period of time? First, let’s make sure we are all on the same page about what it means to “shut down” a home. I have been asked about all three of these scenarios:

This article is primarily meant to discuss concerns about the first scenario, but let’s quickly address the other two:

This is a very tricky proposition unless you are checking in on the home on a regular basis to make sure that you indeed are not setting the thermostat back too far. I often hear of setbacks in cold climates to 50°F,  but bear in mind that the temperature at the thermostat can be significantly different than the temperature at piping runs squirreled away in cabinets and chases.

Power outage are out of your control

We can only hope that having no running water, electrical power, or gas/propane is a short-term proposition and frankly, moisture issues—particularly moisture generation from occupants—are really far from the top of your worry list.

When leaving your home empty, consider how it may get wet

A home put on total hold for say, three months in the winter? Let’s break this situation down based on the four ways that a building can get wet: liquid water (bulk and capillary) and vapor (air leaks and diffusion).

Bulk water and capillary action: The forces driving liquid water can and do act on a building regardless of its mode. Bulk water is driven by gravity and wind while capillary water is driven by porous materials in direct contact with each other (with one of them seeing liquid water, usually at the footing or slab). If you have managed bulk and capillary water with continuous control layers, they work just as well when the building is shutdown as when it is occupied. It is true that if you have not managed these moisture sources well, an unconditioned building will certainly dry much more slowly than a conditioned one, but the real problem extends to and beyond the periods of shutdown.

Vapor through air leakage: The forces driving air leakage are stack effect, mechanical system pressures, and wind. Stack effect is driven by the indoor/outdoor temperature difference (delta T). If the indoor and outdoor temperature difference is zero or slight, this is not much of a driving force. If the home is without power, there are no fans running. That leaves wind; there is not much we can do about this driving force; it won’t change based on our building’s mode.

Vapor through diffusion: Vapor pressure differences between spaces—most importantly between the inside and outside of the building—are the driving force for diffusion. Both temperature and relative humidity differences (warm-to-cold and high-to-low) combine to move vapor by diffusion. But with the building not being actively heated or cooled, the building will largely equilibrate with the outdoor vapor pressure. As long as there are no new or continued sources of moisture working on or inside the building, there simply is little vapor drive from either inside to out, or outside to in.

For both leaking air and diffusion, we are most worried when the vapor is cooled to or close to dewpoint. With the building neither heated or cooled, it is approximating the heat and moisture content of the air outside, so driving forces are minimal and opportunities for condensation are also minimal.

Our continuous water and air control layers are dependent on these seals. If each of these has been installed properly, they are capable of withstanding temperature ranges equal to or greater than what your shut down building will experience. In fact, it is likely that during a building shutdown, they will cycle less frequently and less dramatically than when your building is up and running.

Shades and shutters: open or closed?

This is an interesting question. Heat gain through windows can warm the shutdown building during a sunny day, but will likely increase heat loss on cloudy days and at night. In the overall scheme of things, shade and shutter positions during a building shutdown are likely more about security than what they contribute to the hygrothermal positioning of the building.

What about expansion and contraction with very different relative humidity and temperatures during building shut down? Most building materials expand and contract more with moisture content changes than with temperature changes. The good news is that with a building in shut down mode, temperature changes inside the building may occasionally change relatively rapidly, but moisture changes will change slowly. You may have building contents that have demanding hygrothermal requirements—artwork, musical instruments, rare books and photos—but building materials are far more likely to safely accommodate these changes. 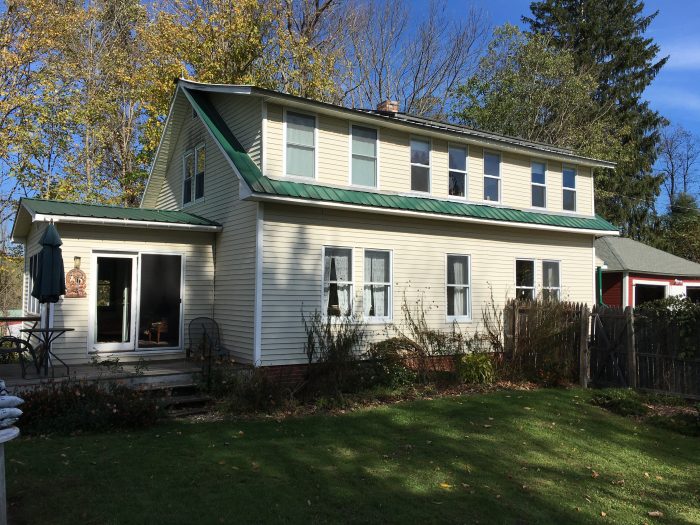 The main house is on a full foundation; there is a small sunroom addition to the left that is on a crawlspace foundation.

A year or so ago, I got a call about this 1930s home because of some moisture issues in the basement. The basement was indeed damp, but not wet—there was high humidity but no standing water. 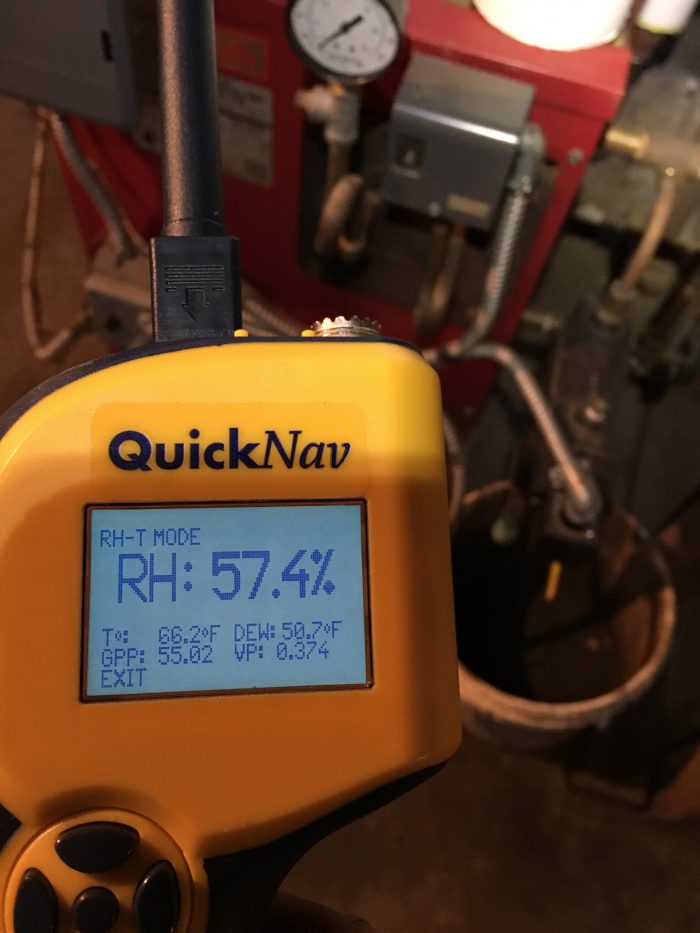 I conducted my building assessment in mid-October 2018; this image shows the temperature and moisture profile of the basement. 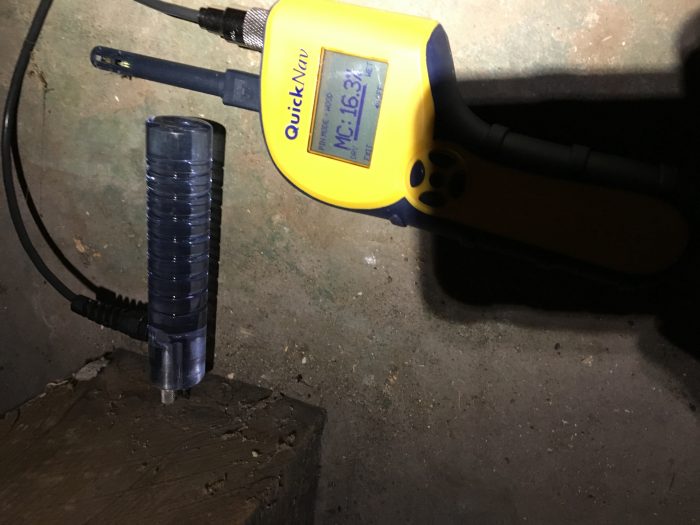 There were several posts bearing directly on the basement concrete slab (no capillary break), with this one at 16.3% the lowest in moisture content. 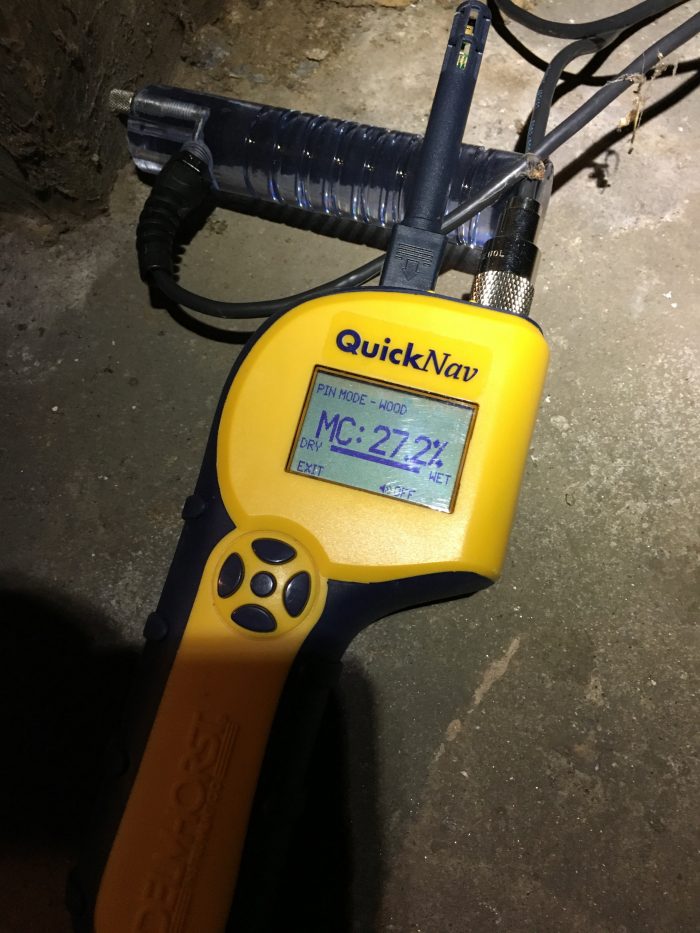 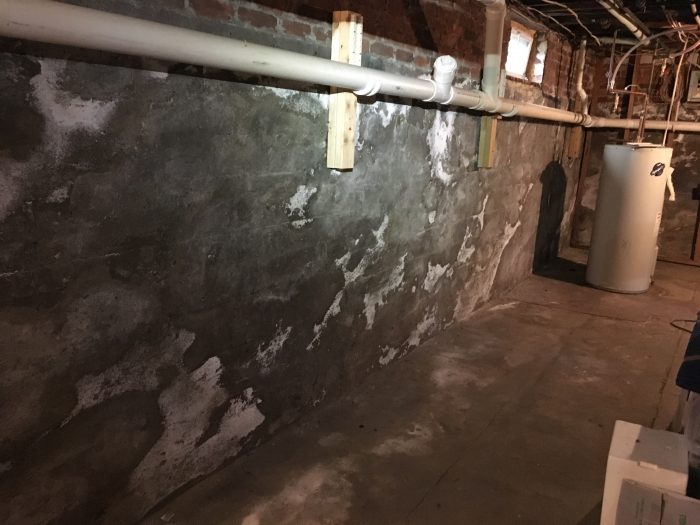 Efflorescence on the concrete foundation walls indicates moisture making its way into the basement, at least intermittently.

But the sill beams in direct contact with the top of the foundation walls were all well below 15% moisture content by weight. 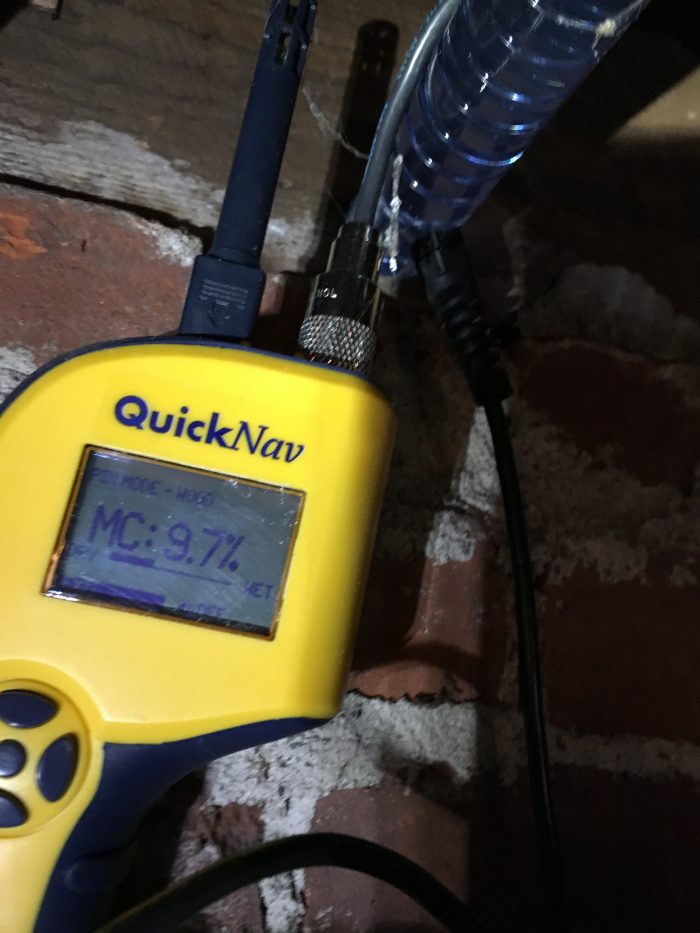 Despite the sill beam bearing directly on the brick foundation wall with no capillary break, it was quite dry. 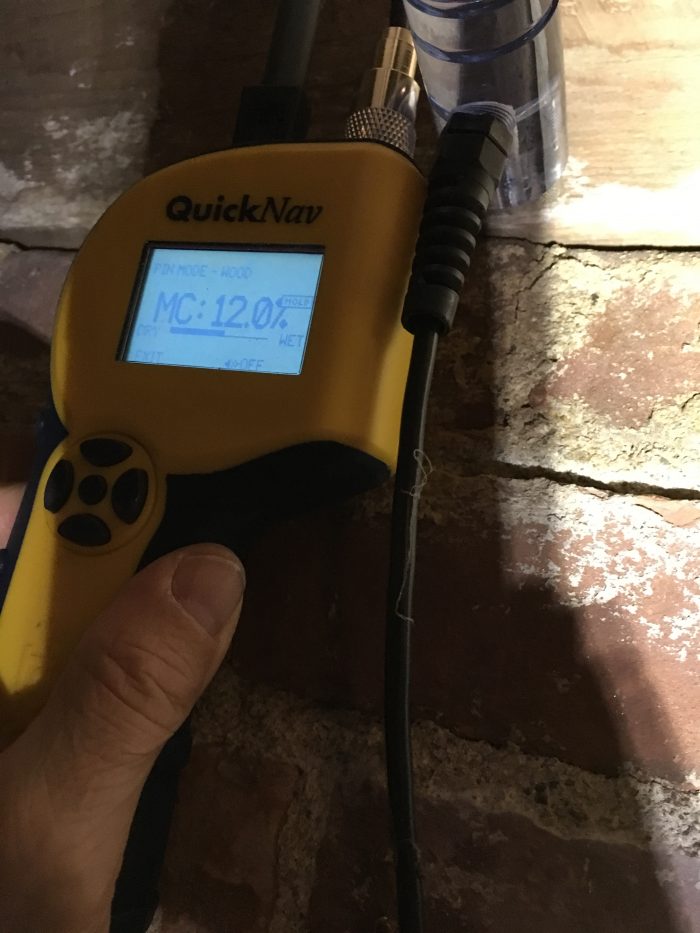 There was a basement dehumidifier but it ran pretty sporadically—like most dehumidifiers not drained but governed by a float valve shutoff.

While I did not do a blower door test on the home, I was sure that it was quite leaky and fully expected to find moisture problems in the attic connected to the moisture source in the basement and driven by wintertime stack effect. Indeed, the attic floor was insulated with air permeable cavity insulation with no air barrier but there were no indications of any moisture problems: no mold, no moisture stains, no musty odor.

As I was explaining to the homeowners the importance of continuously managing the moisture in their basement because in the winter it can end up in their attic, and expressing some surprise that there were no indications of moisture issues in the attic, they stopped me. “Would it make a difference that we are gone about 4 months each winter?” they asked.

For the last 10 or so years, the retired couple has been working and traveling abroad, carefully shutting down their home, and only having someone clear snow to get into the house to manage their mice problem. They don’t throw the house electrical panel breaker—because they have rooftop PV—but they disconnect or shut down everything, including their boiler and domestic water heater.

I asked about any moisture issues when they return each year in late March or early April: surface mold, condensation stains, musty odors. “Nope. The only thing we do when we get back is break out all the bed linens, blankets, and towels from airtight storage, and shiver a bit for the couple or so hours it takes for the house to warm up.”

Note that the home has plenty of windows on the south side, particularly on the 2nd floor. While the homeowners are gone in the winter, all shades are up everywhere, so lots of daytime solar gain on the south side, but also lots of heat loss through all the windows at night.

Monitoring a home on vacation

I asked the homeowners if this year, could I monitor temperature and relative humidity in their home to see just what happens during the winter when they are gone? They were more than happy to oblige. 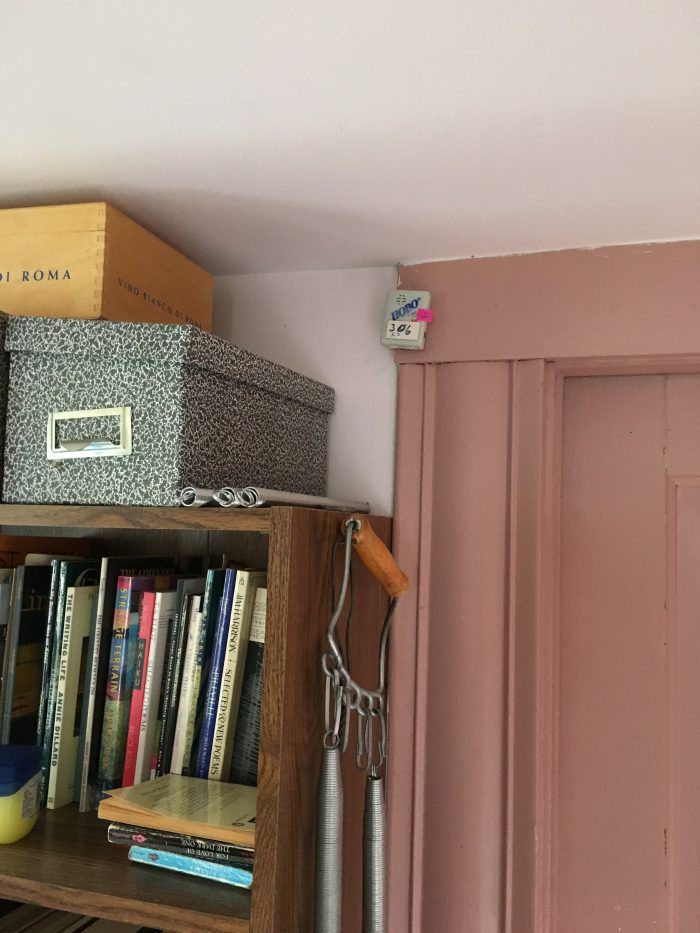 HOBO data logger installed on the 2nd floor on an interior wall.

I installed four HOBO temperature and relative humidity data loggers in their home on October 18: one each in the basement, first floor, second floor, and outside in the shelter of their back porch. The loggers are on a delayed start for December 3; the couple leaves for the winter on December 4. I will retrieve the data loggers sometime in April 2020 when they return and report back on what I think will be the first published data on the temperature and relative humidity profile of a home on hygrothermal vacation.